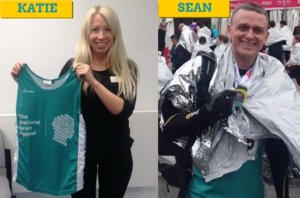 The London Marathon is the biggest single fundraising event in our calendar – and this year we have an impressive 24 runners making up our fantastic #TeamBrainAppeal. With just a short time left until race day on Sunday 24 April, we caught up with two runners who both work for UCLH – and wanted to raise money for The National Brain Appeal − Katie Herron and Sean Hession.

“Each day I learn so much from my patients”
“I’m faced with the reality every day that things can happen to your health that can make life more difficult, and that it’s important to treasure each day and challenge yourself. A patient inspired me to take on my very first marathon back in 2014. She told me that she’d started to leave her bedroom every day for the first time in years, because she realised life was passing her by due to pain. She wanted to embrace life because you never know how long you’ve got. After our appointment, I immediately signed up for my first marathon around Loch Ness!

I’m a clinical psychologist at The National Hospital and I help patients cope with long-term pain. I see patients individually and help run group pain management programmes. I also work on the wards supporting in-patients cope with pain. I love my job and couldn’t imagine myself doing anything else. I think my patients are so brave and I learn so much from them every day.

I’ve run two marathons before but swore I would never do it again! My colleagues here in Queen Square have been amazingly supportive and help me if I’m limping round the department. It’s been especially helpful working with physiotherapists who have run marathons themselves and given me all the advice I could ever need.

Being from Morecambe originally, my secret weapon when I’m on a long training run is Kendal mint cake – it works wonders! I’m very nervous about struggling on the run with a big crowd watching me, but I’ve heard the cheering along the route is very encouraging! My family are coming along to support me on the sidelines and three of my closest friends will be there. My boyfriend Pete will also be cheering me on (from the pub!). It gives you such a boost seeing someone you know in the crowd. For me, the worst part is always the last six miles − you have nothing left in your tank but have to keep going. I normally finish around 4hrs 30mins so I’m hoping to stick to something similar.

So far, I’ve got £1,400 in sponsorship money and I’m trying to raise more by running a sleep workshop. I gained my PhD in sleep issues and have found that it’s a useful skill to help patients. I’ve taught on sleep previously, and have realised this is a gap in how we treat chronic conditions in the NHS. There are still places left for the session on 21 April (email me on katie.herron@nhs.net to book your spot). I hope the money I raise can help improve the care of as many of our patients as possible.”

“It was heartbreaking to see Grandad deteriorate”
“I’ve always wanted to run the London Marathon, but honestly never had the courage to actually do it. However, after watching my grandad battle with dementia, I realised there would never be a better reason to challenge myself.

My grandad, Vincent Hession, was a proud Irishman from Galway. He served in the Irish guard for the British Army and came to London in the late ’50s for work and ended up staying here. He returned to Ireland with my nan when he retired but life became too difficult for them following his diagnosis, so they came back to England to be closer to family.

It was heartbreaking watching my grandad go downhill. It was especially hard for my nan who tried so hard to look after him, but just couldn’t cope, and eventually he had to go into full-time care. The dementia was very aggressive and after having a stroke he deteriorated further, and passed away last year. The cruellest thing about dementia is that it slowly takes away the person inside. My grandad would still recognise me and be happy to see me, but we couldn’t chat like we used to. It was so difficult to see him that way, but I’d often visit him, and we’d just sit together.

After seeing the effects of this cruel disease and knowing that there’s no effective treatment, I knew I wanted to raise money to help. I work at UCLH as a senior information analyst, so I was aware of the work being done at The National Hospital. I spoke to colleagues there who told me about the exciting future plans for dementia research in Queen Square, and I immediately decided to run for The National Brain Appeal.

The training has gone well, although I have found the long runs tough going. Thinking of the money people have donated and the difference it could make has really helped on those cold, windy days when all you want to do is go stop and go home! My friends and family are coming to cheer me on for race day, which will help me get through those tough last few miles.

I’ve raised 83% of my target so far with the help everyone who have donated generously. I also organised a 5-a-side football tournament last week which was a massive success and great fun. We had eight teams competing in total, four of the teams were made up of staff members of UCLH, one from Great Ormond Street and one from the Whittington. We managed to raise another £700 towards my target which has really helped.

If doing all of this can play a small part in the advancement of treatment and care for people diagnosed with dementia in the future, it will all be incredible. The situation sufferers like my grandad end up in can’t continue, and I’m sure this hospital will play a part in ensuring that it doesn’t.”