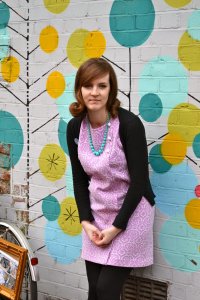 I’ve had quite a rollercoaster over the last 10 years – I’ve been admitted to The National Hospital for three different neurological issues, but thankfully I’ve come through the other side – and would not be here if it wasn’t for the amazing doctors and nurses at Queen Square.

It started when I was only 24 years old, and I woke up with double vision. My GP sent me straight to A&E where doctors discovered a tumour in a bone under my pituitary gland. Within a week I was at Queen Square, having a biopsy followed by surgery. The operation opened up my head from inside my mouth, almost like my face was a pair of French doors – it was very intrusive! After I recovered I had a course of radiotherapy and things  were calm for four years.

Then, in 2013 doctors discovered an aneurysm in my right carotid artery – it was roughly in the same area that my tumour had been. I had an angiogram, which felt like a water pistol was being fired inside my head. I cried a lot, but the team doing the angiogram were amazing, holding my hand and reassuring me that it would be OK. Afterwards it was decided that I should have it coiled to reduce the risk of a rupture. To do this, very fine wires were fed into the aneurysm and coiled up to block it off. Unfortunately, during the procedure the aneurysm burst and I had a bleed in my brain. Thanks to the amazing doctors, I recovered well and was soon back on my feet.

If that wasn’t enough, a year or two after I recovered from the aneurysm, some of the wires that were used to block my artery managed to escape, travel through my sinus and poked through the back of my nose. This created a route for bacteria to get in to my cerebral fluid – and I contracted bacterial meningitis. I thought I had flu and I texted my dad asking him to come and help me, but when he arrived at my flat, I was talking deliriously, so he immediately dialled 999. Then I slipped into a coma, and woke up a few days later at Queen Square – again! It took me another two months before I was well enough to leave, and for most of that time I had to lay flat because it was too painful to sit up. The meningitis was the hardest and most painful thing I’ve ever been through.

It’s incredible that the hospital has saved my life multiple times, but by a strange quirk of fate, after one of my dearest and oldest friends, Holly also comes to the hospital regularly. She’s treated at Queen Square for three meningiomas that were caused by the radiotherapy for leukaemia that she had as a child. I’m almost sad we’ve never been in-patients at the same time! One time she was in the same bed, on the same ward as me, just within a few within a few months of me!

Considering everything I’ve been through, I’m pretty good health wise. I do have some double vision, but I don’t let it get me down. I keep very busy, I have a full-time job working for a trade union and in my spare time I run a vintage clothing shop in Muswell Hill, north London. My shop is called ‘Can’t Buy Me Love’ and it started life soon after I recovered from the tumour. It specialises in clothing and other items from the 50s, 60s and 70s. It’s only open on Saturdays, because I do need at least one day a week off!

I feel really very fortunate to have been treated at The National Hospital. I truly believe that I have had the very best treatment and care that anyone could ever hope for. I never doubt that my doctors are doing everything possible to keep me well. They are my heroes – from Joan Grieve my surgeon, and Tina and Sarah – the neurovascular nurse specialists, to Louisa the speech and language therapist, and all the nurses and doctors who have cared for me. I simply wouldn’t be here without them. I’m also really grateful that I live in a society which has a national health service, not only because it’s been there to save my life, but also because I like to think that it was not just the teams at Queen Square that looked after me when I was ill, but the society that I live in too.”