Rallying around The National 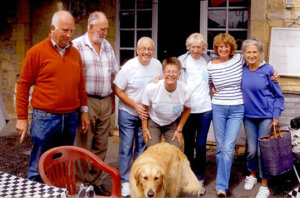 We have many long term supporters who have repeatedly amazed us with their continued fundraising efforts.

Having raised £25,000 for us over the years, Sarah Singleton and her husband Neil are just one example of the absolutely overwhelming dedication that enables The National Hospital to continue to help the 12.5 million in the UK affected by a neurological condition.

Here, Sarah tells us where it all began, and what led to their most recent event.

“I wanted to repay the hospital for saving my life. In 1990, after months of severe headaches and a number of visits to my GP, I was rushed to Whittington Hospital, North London. I had a CT scan and was transferred to The National Hospital, then in Maida Vale. The diagnosis was not good: a rare and malignant brain tumour called a gliosacoma, which kills most patients within 18 months. After the first operation to remove the tumour I had a brain haemorrhage, which needed another operation. My neurosurgeon, Mr Michael Powell was able to stop the bleeding and remove more of the tumour. After three weeks I was transferred to UCH for six weeks of radiotherapy, speech and physiotherapy. I had to use a wheelchair and continued with speech therapy for around three  years.

To the surprise of my doctors I continued to improve and subsequent re-examinations re-diagnosed the tumour as benign pleomorphic xanthoastrocytoma, which would have certainly killed me if the operations had not taken place when they did. After five years I was able to go back to full time employment. The first event we ever organised was a 12-hour music marathon, playing records at our home requested by people who made a donation. We even managed to get a “plug” on Capital Radio! This raised over  £1,200 alone. After that came the three-legged race in Queen Square, which led to three-legged pub crawls in Highgate & Primrose Hill. A friend of ours, Bob Marshall motorbiked round the UK, and Janet Beck, also a close friend, raised money at Woodford Golf Club.

Following the success of our previous fundraisers, it was suggested to us that we do another event, and so we came up with the idea of a car rally. There were six of us who got together to organise the day. There was to be an entry fee to the rally, a quiz, and a raffle to be held at the Start/Finish bar & restaurant. In the lead up to the event we went to five local villages/towns to compile questions for people to answer. We got some very generous donations for the raffle including one from our local cricket club, and food and drink was provided by Le Rendevous restaurant. Many of the people taking part in the rally were from the cricket club, or other friends we had asked. In total some 40+ people took part, and overall we raised £700 – our initial expectation was £400.

At the moment Neil and I have nothing else planned – we sometimes worry about over-pestering our friends, but we have had an amazing amount of support from them over the years.

I feel so lucky having survived such a difficult & life-threatening time and my attitude to life changed – I say live each day to the full. I’ve always loved travelling and thus far have visited some 39 countries – the 40th is the next target! Neil and I have also done two fundraising treks – one to Machu Picchu, Peru and one to South Africa.  We also count ourselves very fortunate to live in a beautiful place in France.

We will never forget the wonderful help and support provided by The National Hospital and staff, especially Mick Powell.”