‘I was buzzing from Our Dementia Choir’

If you watched Our Dementia Choir on BBC One recently, you’ll know how powerfully the documentary showed the benefits of music for people living with dementia. 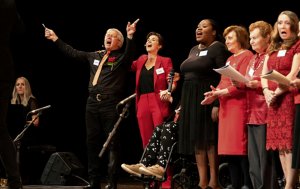 One of the choir members, 67-year-old Chris Connell, (above, with arms raised) has a rarer form of the disease – frontotemporal dementia (or FTD). This type of dementia means that cells are being affected in the frontal lobe of Chris’s brain. This can result in poor judgement, changes in behaviour, and an inability to plan or concentrate. He was diagnosed four years ago.

Chris takes part in FTD research at Queen Square, with the goal of working towards an effective treatment for the condition. He’s been up to The National Hospital three times now and has had lumbar punctures, MRIs, and takes various cognitive tests. His wife Jane recently attended one of Rare Dementia Support’s FTD Seminars, which she found a great help.

Chris got involved in the documentary when heard about the choir from a friend’s daughter. “I have always loved music – whether it’s singing or playing guitar,” he says. “I was on the phone and accepted into the choir immediately.” 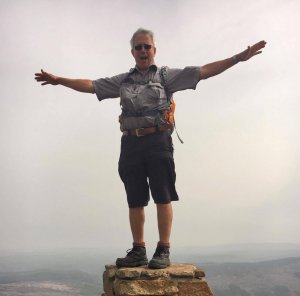 Being a part of the choir was incredible. “I adored it and was buzzing from the experience,” says Chris. “I did struggle with learning some of the words though. Sometimes I would read them from bits of paper, but it would be gone again in the next second.”

So Chris put one of his hobbies – his video making skills – to good use. “I found it far easier to hear the music and see the words on screen, so I made myself some karaoke-style videos and it helped. The whole documentary took three months to film and I threw myself into it, and even made personal videos of my involvement in the project. I shared these in a closed Facebook group with the other members of the choir.”

His wife, Jane, says that Chris was losing a bit of confidence prior to the programme, but being a part of it gave him a real boost. “The film crew, presenters, scientists were all wonderful,” she says. And Chris agrees, especially about the presenter,  Line of Duty star, Vicky McClure. “She’s a stunning member of the human race!” he says. “In fact, everyone involved in the programme was fantastic. We really opened up with the crew, and Jane and I talked about my condition in a way that we haven’t managed to before. Some of our conversations became very tough, and even a bit dark, but it felt good to talk about our fears out loud. All of us in the choir have stayed in touch and we met up just other day. A lot of the carers hit it off too and have made some really valuable friendships.”

When Jane recently attended the FTD Seminar run by Rare Dementia Support she found very useful. “It was really special to meet other people who have FTD,” she explains. “We shared the unique, specific problems of the disease and how to care for someone with it. It was amazing to see how hard everyone from the UCL Dementia Research Centre is working to improve speed of diagnosis, and how enthusiastic the researchers are.”

Rare Dementia Support’s director, Professor Seb Crutch, was the programme’s scientific advisor and on-screen expert. He has made a short video about his involvement in the programme – click the image below to watch.

Here, at The National Brain Appeal, we fund Rare Dementia Support (RDS) group meetings which offer six different groups for the varying forms of young-onset dementia. These include: Familial Alzheimer’s Disease, Frontotemporal Dementia, Familial Frontotemporal Dementia, Primary Progressive Aphasia, Posterior Cortical Atrophy, and Dementia with Lewy Bodies. We want to grow the service so that more people with an atypical dementia diagnosis can access the information and support they need. Our target is to raise £150,000 a year to support the service.

Find out more about RDS