Don’t think about it, DO it! 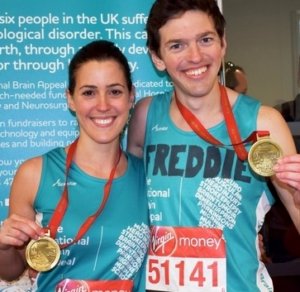 Think you’re not up to taking on a challenge for the New Year? Think again! National Hospital patient Virginia Goldsack never thought she would be able to complete more than a 5k – until she was persuaded to do the impossible and run The London Marathon.

“I loved 5ks but the thought of doing that eight times over in the form of a marathon had never interested me! Taking on this challenge was a big deal for me – I think this is why I was able to raise so much money, because people who knew me knew that I’d never sign up to do something as bonkers as this, particularly after all the health issues I’ve had.

I was diagnosed with an Acoustic Neuroma/Vestibular Schwannoma (a type of non-cancerous brain tumour) in September 2013 after almost completely losing my hearing over the course of six months. My consultant found a 4cm tumour in my brain after an MRI scan, so I then went on to have 8-hour surgery to remove most of it. After three months I came back to receive Gamma Knife treatment (where radiation beams are precisely targeted on the tumour) to prevent the residual tumour from growing again.

Three years on and I’m not quite back to who I used to be – I live with constant headaches (almost manageable) and tinnitus (not manageable, but I’m used to it by now), and my hearing is not repaired. My vision was impaired due to a cranial nerve palsy in surgery which left me with double vision. I had four eye surgeries to correct a squint – and I can see in single vision for the most part now.

Giving something back
After recovering, I wanted to do something meaningful for the hospital to give something back after the care I had received. My consultants and surgeons at The National Hospital are amazing human beings. As far as I’m concerned they have halos and golden auras of supernatural healing light. If I could give them my marathon medals I would… but they might find it odd!

I won’t lie – I found the whole race tough, but I decided to take it slowly and enjoy it. It took me five hours, 35 minutes – people asked me if I got lost en route! But it’s not often you experience thousands of people screaming support for you, so I wasn’t going to rush it. The worst parts were mile 20 when my legs decided to stop working, and when I was so exhausted running through Westminster that I had double vision and saw two Big Bens!

“Life is always a case of mind over matter. The fact remains that I was lucky to be running in the London Marathon – especially after having my brain opened up, four eye surgeries and with a tumour (albeit benign) – still in there. Just enjoy the experience, marathon and life.”

My boyfriend, Freddie, also signed up with me and ran for The National Brain Appeal. He was a huge support during the training, race and most importantly, the fundraising. Together we raised an incredible £27,000 – that’s more than £1,000 a mile. I still can’t believe we raised quite that much. I am so proud – and looking forward to raising more in the future… in a non-running event!

I’d urge anyone unsure about signing up for a challenge to just DO it! The sense of achievement afterwards, the fitness boost, and most crucially the feelgood aspect from raising money for the world-class National Hospital – it all makes for a truly unforgettable experience.”