My walk for Will 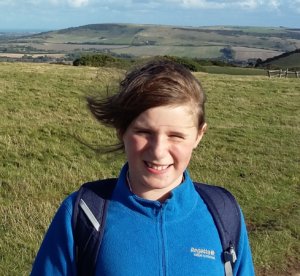 Lily Dannreuther, 9, decided to walk from Brighton to Eastbourne in memory of family friend Will, who died after battling a brain tumour.

He was a National Hospital patient and took on a fundraising walk back in 2010 to help raise money to set up the Molly Lane Fox Unit. Lily is raising money for our latest Molly’s Fund appeal, which aims to double the size of the unit.

“Will was always very kind and caring – and he was funny too. I remember when we used to eat ice-cream it would get stuck on the end of his beard. We did so many fun things together. I loved it when we went for walks with his dog called Coco and also when we used to go swimming.

Will was very sporty and was the captain of a cricket team he set up in London. He was really into wine as well – it was his job. He was called a vintner, which dad says is a wine merchant.

My happiest memory of Will was when we took his dog Coco for a walk and then washed her in the sink – and dried and brushed her afterwards. I loved that!

I don’t remember Will ever saying anything to me about being ill. I was really sad when Will died.

I came up with the idea of walking from Brighton (where we live) to Eastbourne. It is a long way – nearly 30 miles. I thought we could do it for Will.

I talked to my dad about it and we decided to also ask for sponsorship so we could give some money to the hospital Will went to. Dad knew that the hospital charity was raising money so they could build more wards for people with brain tumours and we wanted to help with that. Will did a walk to raise money for the same thing when they first built the wards a few years ago, so it was nice to do something similar.

People at my school found out I was doing the walk in October and sponsored me – and it even gave some of them the idea to do the same walk for a different charity. But the week before we were going on our walk, I was off school as I was really ill. One night I was sick five times! But a few days later I felt much better so we set off on Saturday. We started our walk early in the day by a racecourse.

I enjoyed walking along the South Downs – I think the best bit was that I got to eat lots of chocolate! We walked past so many fields – the cows would just stand and stare at us until we left. We passed lots of people riding horses too. It was very pretty countryside, we could see rain going through the valley and the rainbows afterwards. It was also really windy – whenever I had to blow my nose, the snot blew back into my hair. Yuck! We called them snot blasts – me and Dad laughed lots about that. One time we stopped off in a pub for lunch and told a man there why we were doing a walk and he gave us £5! When we got to the end we walked up a massive hill where we could see so far. I did a big jump in the air to celebrate.

I wanted to get £1,000 in sponsorship but in the end we raised £1,600 – nearly double! If anyone would like to sponsor me it would make me so happy! (see the link below). I still think about Will and miss him. I am so glad we did the walk.”

You can still sponsor Lily’s Walk For Will and help us to reach our appeal target of £500,000. We are almost there, so every penny counts!

Will – who passed away last year after battling a brain tumour