“Mum’s illness has made us all closer” 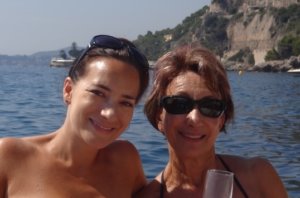 My mum, Raena, was only in her early 60s when I began to notice little changes in her behaviour. She had a few scrapes in the car, started to misplace her keys and began to get confused when making plans.

It was such a gradual deterioration, but after a while, me, my brothers and my Dad, Nick, persuaded Mum to go for a series of tests and in 2012 she was initially diagnosed with early-onset Alzheimer’s. After seeing a specialist it turned out to be a form of dementia called Posterior Cortical Atrophy (PCA), which affects the visual part of the brain and alters spatial awareness.

It was such a shock when we were given the news but it all began to make sense and go some way towards explaining certain things – for example, why her judgement of distance had been affected, and why she had trouble with things like using a cashpoint, putting a seatbelt on and getting a key in a lock. It also helped prepare us for what would inevitably come.

It’s been incredibly tough for Mum dealing with the effects of the disease. On the surface, you wouldn’t know anything was wrong – she seems compos mentis and very capable. But she is slow to do things, has trouble getting dressed and doing everyday chores like cooking. Her memory has deteriorated substantially, which is very upsetting for her, and she regularly loses her phone, keys and money. I think the biggest blow so far was being told she can no longer drive – it knocked her sense of pride and affected her independence. It is tough for us all to watch the changes in her behaviour and in her personality.

But there are some positives, too. We’re an extremely supportive family, and if anything this has brought us even closer. We are thankful that so far, Mum’s deterioration has been gradual. She still has her wonderful sense of humour, spark and sweetness and her memory is often clear and sharp. We focus on what she still can do − she plays tennis, has personal training sessions, goes to the theatre, cinema, to galleries and out for dinner regularly. She’s even been on adventurous holidays abroad since being diagnosed, to places such as Myanmar.

As part of Mum’s treatment she regularly goes to the National Hospital. She says the staff at the hospital are amazing, they’re so kind and friendly − she and my dad are always greeted like old friends. This means she doesn’t mind going for appointments, in fact, she actually quite enjoys it because the people are so nice.

Mum also attends the Dementia Research Centre (DRC) for written and oral memory tests, blood tests and MRI scans. She is taking part in potentially ground-breaking research into a new drug treatment and has been on the drug (or a placebo) for over a year. Following initial trial success she is now starting a course of the actual drug. Dad is also taking part in research, as a control subject.

We’ve been so impressed by the work at the DRC, we wanted to help. So Dad has decided to raise money for research for Professor Jonathan Schott and the PCA and Alzheimer’s team at the centre. We have thrown various pub quizzes and a bake-off to help raise funds but we thought it would be great to have a big event to help reach the target. We decided on a one-day charity bike ride as it would provide a great challenge that many of our friends would be able to take part in, and chose Mallorca for its hilly terrain, beauty, climate and bike friendly set-up. The training started in earnest last year and there was one wintry training ride when Daniel and Dad came off their bikes in icy conditions. Daniel dislocated his shoulder and ended up in a sling. And Dad scraped his face badly and had to go to A&E. Not a good day!

On the day we had 14 enthusiastic cyclists, including my Dad Nick, my brothers Simon and Daniel (all pictured above), and my husband Ian. The ride was fantastic − everyone did so well and completed a fantastic 107km up and down steep mountains, in the heat and wind.

The challenge went really well, there was just the one mishap – when one cyclist, Johann, crashed and came off his bike. He pulled the skin off his elbows, but was very brave and soldiered on! The high point had to be riding in Mallorca, with the beautiful views of the beaches, hills and winding through gorgeous hilltop villages. Mum, my 4-month-old daughter Gracie, and I met all the cyclists at their lunch stop, to congratulate them and spur them on for the remainder, which was lovely.

Just having Mum there to share in the experience was wonderful, she felt so proud, especially of Dad, who turns 70 this year, and is so happy to be part of it all. Another high point was how the team developed such a close bond by going through the experience together. It felt like one big family. At the end, everyone had well-deserved pints and there was a great atmosphere and a real sense of achievement. We’ve now raised over £21,000 – with real hopes of reaching £25,000 for the bike ride fundraiser. Dad has pledged £40,000 in total for research and has already successfully raised a substantial amount through generous donor contacts. Thanks to so much generous support from everyone our target amount is in sight, and we hope that it will support this much-needed research to help my mum and others like her in future.

To make a donation to the cycle team, click here.