Our vision is to improve the outcome and quality of life for the one in six people in the UK affected by a neurological condition.

Junior suffered a stroke at the age of 36 that left him with speech and language difficulties, known as aphasia. He received speech therapy for this at The National Hospital for Neurology and Neurosurgery in London. The National Brain Appeal is the hospital’s charity and Junior lent his support to their campaign to fund the Aphasia Service.

Aphasia is an acquired communication disorder most commonly caused by stroke. It is estimated that there are more than 350,000 people living with aphasia in the UK yet many people have never heard of it. It can affect people differently, depending on where in their brain has been damaged but most people report speaking, listening, reading and writing are challenging. This means everyday activities like using the phone, internet, having a conversation are a source of profound frustration and distress not only for the person with aphasia but also their families and friends. For many people it means losing their jobs. The frustration of knowing what you want to say but struggling to say it, can lead to depression, anger, social isolation.

The National Brain Appeal is fundraising for a new high dose of 100 hours of therapy for patients with aphasia. The charity is raising £600,000 to fund the two-year programme, thought to be the first of its kind in the UK. Currently in the UK patients receive, on average, twelve hours of speech and language therapy.

In 2018 Junior Agogo gave this quote to The National Brain Appeal. He said: “Since my stroke I have had difficulties with language. Even though I know what words I want to say I’m anxious about getting the words wrong. I just want to speak like I did before the stroke, that’s all. The high-dose aphasia therapy service would hugely benefit people like me to overcome these problems.” 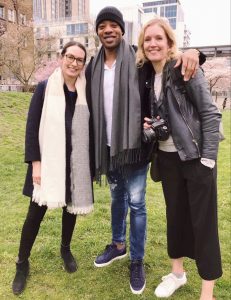 Keith Brookman from the BRFPA said: “Junior’s death has touched everyone at the club where he was such a popular figure. We at the Bristol Rovers Former Players Association wanted to find a way to honour his memory. We know how much he struggled with aphasia following his stroke. One of the biggest challenges he faced was his ability to communicate clearly, thus leaving him isolated from friends and former team mates. He bravely spoke out about this in the BBC documentary Speechless. In recent years Junior gave his support to The National Brain Appeal’s Aphasia Service to help people like him and we felt that donating to this would be a fitting way to remember him.”

To donate to The National Brain Appeal Aphasia Programme go to: https://www.justgiving.com/campaign/aphasia