‘I make sure I enjoy every day’ 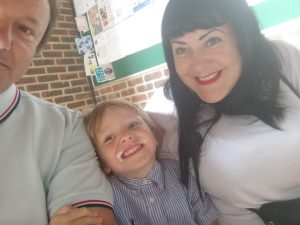 In the summer of 2018 I began to have severe headaches. I took painkillers but they didn’t help. Then I started to experience dizziness and I even collapsed a few times.

My partner, Brian, along with family and friends soon started to notice the effect these headaches were having on me and encouraged me to attend A&E at my local hospital. Doctors thought they were migraines, but booked me in for an MRI scan six weeks later as a precaution.

By October my symptoms were becoming unbearable. It was so bad I was signed off work – I’m a community psychiatric nurse and love my job – but I just couldn’t cope. I was vomiting, I felt fuzzy and completely drained. I began to collapse to the floor and have, what I now know, were seizures.

An MRI at my local hospital in Basildon showed I had swelling on my brain. Doctors decided to admit me to hospital for further tests. Four days later I was transferred to Queens Hospital in Romford, who provide neurology and neurosurgery services. It was here that I found out I had a brain tumour. I was so shocked.

I had never come across anyone with a brain tumour before. I really didn’t know anything about them or what to expect. My surgeon said that the tumour was wrapped around my right optic nerve. He was confident he could remove if not all, most of it. He wanted to operate the next day. I barely had time to take it all in. The surgery itself was risky. I was told that I might not be able to walk or talk afterwards and that there was a risk of death. However, I felt I had to do it as I couldn’t carry on as I was. The morning of the operation I had a complete meltdown. I was terrified. Would I ever see my beautiful family and friends again? Would I come out of surgery with brain damage? 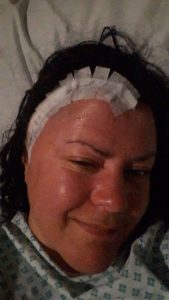 Thankfully it all went well. We were elated that I had survived. My recovery was remarkable, apart from partially losing the sight in my right eye. I could walk and talk and there were no cognitive issues.

However, my relief was short-lived. When I met with my surgeon two weeks later, he explained that I had a grade 4 glioblastoma, a very aggressive form of brain cancer, with fewer than 10% of patients alive five years after diagnosis following standard treatment.

I was devastated. I just couldn’t think straight, and Brian and I both broke down in tears. I thought I was through the worst having survived brain surgery. All I could think was, ‘I don’t want to die young’.

I was told that I would get the standard six-week course of radiotherapy and chemotherapy, but my consultant oncologist also mentioned the possibility of a clinical trial.

Two weeks before the end of my treatment, I met with The National Hospital’s consultant medical oncologist Dr Paul Mulholland. He has designed and is leading a new trial for glioblastoma brain cancer patients, part-funded by The National Brain Appeal charity. He discussed the trial with me and carried out tests and said that I was eligible to take part in The IPI-GLIO immunotherapy clinical trial.

I needed to start receiving the infusions of a drug called ipilimumab within seven days of completing my radiotherapy. I’d have four infusions in total. Taking part in this clinical trial is something that I 100% wanted to do and I’m grateful for this opportunity and to The National Brain Appeal for funding it. I had the treatment at Mount Vernon Hospital near Rickmansworth which is a long way from where I live but one of my sisters, Lauren, lives 10 minutes away from the hospital so I stayed with her. My partner Brian, my sisters Ruth and Simone and my best friend Lisa did the dropping off, picking up and looking after my 3-year-old son Ash. My family and friends all took turns coming with me for all my treatments. They’ve been amazing.

I have monthly follow-up appointments with Dr Mulholland and MRI scans every three months. The good news is that I was told after my last scan that the area they were monitoring had reduced in size and there was nothing that they needed to act on.

My hair is growing back thick and curly and other than having 20 minute ‘power naps’ when the tiredness is overwhelming, I am doing well. I’d like to get a bit of normality back in my life and I am looking into whether I can return to work for a few hours a week. It is a shame that I have to have MRI scans every three months as you can’t help but feel anxious waiting for that and the results.

In spite of everything I’ve gone through this last year, I’m feeling stronger now both mentally and physically. I make sure I enjoy every day, surround myself with people that make me happy and most importantly, I try to stay positive. I am only able to do this because of my amazing family, friends and colleagues’ support. I am devoted to my family – they are what I live for.”

The National Brain Appeal is part-funding the IPI-GLIO Immunotherapy Trial. It has recruited 49 patients in the UK since opening in January 2019. This is the biggest number of UK patients ever recruited to a brain cancer clinical trial – and is still recruiting patients until summer 2020.

Donate to our appeal

To find out more about taking part in the trial, please email.