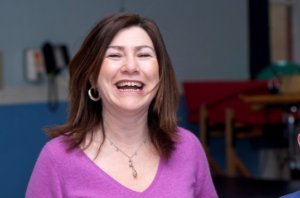 My story is about beating the odds, learning to walk again and raising over £10,000 for the charity which supports the National Hospital. I feel so incredibly lucky as it could have ended so differently.

It all started in May 2007 when I suddenly had severe headaches one weekend. When they didn’t stop I saw my GP who said I had acute sinusitis. But when I was at work a few days later, I started to feel dizzy and shaky. An ambulance was called and I was rushed to hospital, where scans revealed I had a brain tumour. The night the hospital told me I was in complete shock, it was the last thing I could have imagined !

Luckily, I knew a neurologist and I asked him who he thought I should be referred to. He recommended Neil Kitchen at The National Hospital. It turned out that the type of tumour I had was a meningioma, a tumour in the protective membranes around the brain and spine (meninges). It turns out that around a quarter of brain tumours in adults are meningiomas and they’re more common in women than in men.

I was shocked by the news and scared by the thought of brain surgery. When I asked what would happen if I didn’t have surgery, he said I’d be likely to die within a year. It’s so frightening how life can suddenly change. Despite my fears, I felt sure that I was in good hands with Neil. He wasn’t what I expected a brain surgeon to be like − he was so down to earth, and when I saw how precisely he picked up his pen, I felt completely reassured!

On the 25 May I had a craniotomy, where they literally cut through the skull at the back of my head, rather like a boiled egg. It took eight hours, but they managed to remove the tumour and then replaced the piece of skull. After the op, I found out the tumour was very large, about 5cm across – and it had been pressing on the part of my brain that controls my leg movements. I soon discovered I couldn’t move my right leg and I was told I would need to learn to walk again with an intense programme of physiotherapy and occupational therapy (OT). I wouldn’t be going home to my two boys aged 11 and 8 anytime soon − it felt completely devastating.

It was a slow, painstaking process that took me three months, and I stayed in hospital the whole time. Each day I had sessions with the physios and OTs, who were so skilled. They estimated it would take 12 weeks to get me walking and they were spot on! They were also amazingly supportive and encouraging even when I was only trying to move a toe. When you think about brain tumours you automatically think about the surgeons, who are of course critical, but the physios and OTs are the hidden heroes, keeping you positive and motivated for weeks and months on end. It was gruelling, but also uplifting, thanks to them.

My birthday in July was fast approaching and I realised I would still be in hospital for it. So I came up with the idea to start a ‘birthday appeal’ from my hospital bed to help thank the amazing staff at the hospital. I got in touch with The National Brain Appeal – who helped talk me through the fundraising process. After that, I went full steam ahead and emailed all my friends, and asked them to forward the email to their friends, too. I could never have predicted how incredible the response would be: over £10,000 was donated within just four months. The money went towards the hospital’s Brain Suite – the UK’s first-ever interventional MRI operating theatre, which enables real-time scanning of the brain and spine during surgery for greater accuracy and improved safety.

It took two years before I was allowed to drive again, and I have a very slight limp in my right foot where I haven’t quite regained full flexibility, so I’ve had my car adapted to accommodate this. I go back to the hospital for annual scans to make sure the tumour doesn’t grow back. Initially I took medication to minimise the risk of seizures but after two years I didn’t need to take them any more. Since my tumour, I live such a full and active life. After a number of years I was even able to work full-time again in a busy ad agency. I even tried to ski again. I never in a million years thought that would have been possible after I was first told I had a brain tumour. It truly feels like a miracle to be blessed to have a second chance at life.