“It was my dream to work here” 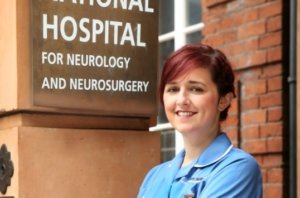 It felt like a homecoming when I returned to The National Hospital last year, and began a shift as a newly-qualified nurse. I’d imagined this moment for a few years – and it all started when I was lying in a bed in the very same hospital recovering after brain surgery in 2010.

I suffered my first seizure when I was just 7 years old and they continued throughout my school years. Just before having a seizure, I’d experience what is known as an aura of fear, which was an awful feeling.

Although a paediatric neurologist was reluctant to diagnose me with epilepsy, I began to try different antiepileptic medications from the age of 7, but nothing stopped the seizures.

At the age of 14 I went to see an adult neurologist who told me I had epilepsy and sent me for an MRI scan which revealed a brain tumour. It was very scary news to hear, but with the support of my family, friends and my faith, I got through it.

In 2005, I had my first operation at Alder Hey Children’s Hospital to remove the brain tumour and I remember looking at the kind nurses who were looking after me and thinking, ‘I can’t wait to do your job!’ Despite this operation, I continued to have seizures, so I went back to Alder Hey the following year to have more of my right temporal lobe and gliosis removed. But the seizures continued after this operation as well.

Despite this, it never held me back and after I finished my A-levels, I went on to enrol at Queen’s University in my home town of Belfast. Unfortunately, I had to cut my studies short and I was told that I could never be a nurse because I still suffered from regular seizures. Needless to say, I was totally devastated but I was determined to achieve my dream and become a nurse.

The surgeon successfully removed all the abnormalities including a tumour he found known as a Dysembryoplastic Neuroepithelial Tumour (DNET), and after a recovery period, I was overjoyed to find my seizures stopped. I was able to enrol back on my nursing course, and graduated with a first-class honours degree last year. Being a patient in The National Hospital, I participated in research studies so I had lots of functional tests and scans, pre-op and post-op which showed that I had no cognitive decline as a result of my surgery.

Now I’m a nurse on Nuffield Ward and I am so happy to be able to help others. I can say quite truthfully to patients, ‘I know what you’re going through!’

During my first week at The National Hospital, I was in the canteen queue and Andrew McEvoy happened to be standing behind me. I introduced myself and told him my story, and explained that it had all turned out well! He was very pleased to hear my story. I now work alongside him daily as I care for his patients. There’s no denying I’ve had a rocky road getting to this point, but I do feel incredibly fortunate to have overcome a series of brain tumours to fulfil my childhood dream.